So in arguing for simpler kits, you must also be arguing for reduced levels of detail? No, not really…

“What I wasn’t prepared for, mainly because at no point did I espouse such ideas, is the notion that by arguing for fewer parts, I am in some way arguing for less detail. Nothing could be further from the truth” 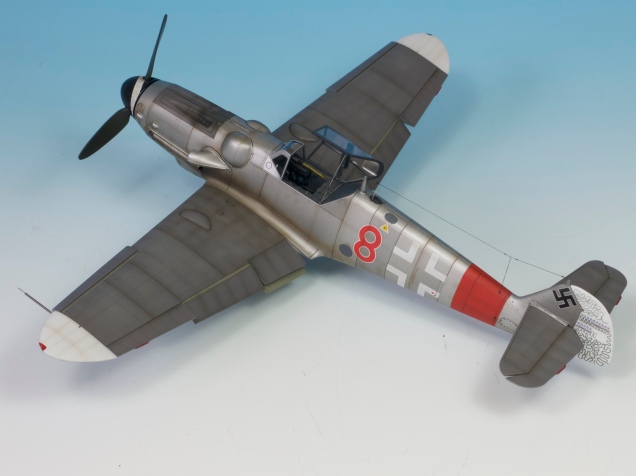 Several days ago I wrote an essay for this blog that suggested that kits are becoming needlessly more complex and with the upswing in parts count, there is the inevitable upswing in price and often downturn in sales. Was I on target with my assumptions – who knows? The response to my thoughts seemed suggest that I may well have been correct to question such things, but that there were — rightly — modellers who still liked the challenge of a lengthy build and the detail that those involved projects often provided. I wasn’t surprised by that, after all we are a broad church and we all have different needs and aspirations and what’s good for me, will more often than not, be dismissed by others.

What I wasn’t prepared for, mainly because at no point did I espouse such ideas, is the notion that by arguing for fewer parts, I am in some way arguing for less detail. Nothing could be further from the truth. My argument, short though it may have been, was for a more sensible approach to the creation and breakdown of a subject and where single parts can be used to create perfectly detailed sections in favour of several that can create an identical result, then that would be a preferable route to take.

I cited a case where sprockets featured separate bolt heads, the original Dragon 1:35 Panzer IVD being in my mind as my fingers tapped away on the keyboard. You may well remember the release of that kit and the 1200+ parts that it contained; you may also remember the vast number of parts that made up the running gear and how when those parts were assembled, many looked like they had been moulded in one piece in the first place! It was madness. Fast forward to 2017 and Dragon have now released a new Panzer IVD that has been designed and produced in collaboration with Platz, a kit that contains around 170 parts. Is it yes complex? Yes. Is the detail less than that found in the earlier kit? Not from the looks of it. Will it look just as accurate, detailed and pleasing once complete? Most probably. Dragon realised, as have others, that complexity and massive parts count is not necessarily the way forward.

There are other examples of how manufacturers have elected to create kits that are far from complex to build, but are virtually perfect in terms of detail and accuracy. Eduard for instance have released over the last few years two aircraft families: the Spitfire and the Me109G. In both cases the parts count needed to build each one is less than 100, assembly taking little more than a few hours to complete. Have they compromised on detail? Absolutely not. Does each package offer a kit and resulting model that falls behind other, more complicated offerings? No. Would a modeller be disappointed by the low parts count and could the kits have been more impressive had they been more complex and time-consuming to assemble? Of course not.

Simplicity of approach is not an argument for less detail and accuracy, which is why I wasn’t idiotic enough to offer that as a point of fact. There are plenty of examples of kits that are simple to build but offer stunning levels of detail, works of art that supply large pieces bedecked in glorious surface details and fittings (just take a look at the one-piece wings in HK Models Mosquito for instance). So I will repeat myself: fewer parts does not mean less detail. And if you need any more proof that less is often more, just grab a MENG 1:48 P-51D and see what else is possible…

In order to put my thoughts to the test and see if I could actually build something a little different, I decided to take some much needed annual leave and rather than sit around drinking beer and eating cheese and onion sandwiches (which still sounds like a wonderfully productive use of my time…), I grabbed a very old Tamiya M1 Abrams kit and set to work. Now, anyone who has built this kit (as I have, six times…) will tell you that not only is it very simple to assemble, it’s rather lacking in detail in places and a bit of a hybrid when it comes to accuracy. Still, I Iove it and like the way that within a few hours I can have it built from the box. In this case I decided to improved its appearance slightly with some addition/replacement detail and just have a bit of fun with the paintwork when the time comes. I tend to refer to these as “legacy builds”, no real effort being made to create cutting-edge replicas, just do something quickly of the hell of it.

Having written my earlier essay, part of the exercise was to think about what I had written and how the kit I was building could have been improved had it been designed in 2017. What would most likely feature today that was omitted back in 1982, when the kit was first released? How many more parts would be needed to make the kit more accurate and detail more complete? Well, the upper edges of the side-skirts could have featured the sealing strips that I had added; the headlight guards would have been in two parts rather than one; separate mesh guards could have been included to create a more three dimensional looking exhaust; the skirts could have been in more than one part and rather than being in once single run, the tracks could have been link and length; the cupola and hatches would be more detailed, the MGs being several pieces rather than just one. Add a few additional details here and there and with current technology that is widely used, the parts count for this kit could still be easily less than 300 and it would still look great. Of course, when adding an interior, that would go up, but as a ‘curbside’ model, simply approached, there would be no need for to be any more complex. And that’s my point: if it’s not needed, why do it? Well… Because…

And it seems as though companies are cottoning on to this idea. I already mentioned Dragon’s Panzer IV and Eduard’s family of Spitfires and ‘109s, well, the Czech concern also seem to be addressing the issues that many faced with their 1:48 Fw190 family of kits as well, kits that offered extraordinary levels of detail, but were — to put it mildly — a challenge to build. A new family of kits is being created that will clone their other recent products, offering high-quality models that are well-detailed, accurate and above all, easy to build. Gone will be the overly complex and sometimes confusing breakdown seen in the initial kit, replaced instead with straightforward sub-assemblies that anyone can build and not just those with higher levels of skill and three pairs of hands. It is, in my opinion, the way forward – especially at the price that companies such as Eduard, ICM and Airfix are offering their products.

Debates such as this will always split opinion — which is why I tend to start them! — with modellers on both sides of the argument offering their thoughts on why their approach is the correct one. But one thing links us all together and that’s the need to continue creating models that are highly detailed, accurate and pleasing once finished. Anything else is just a conversational point of view. But I will repeat this: fewer parts doesn’t mean less detail – it really doesn’t.

See you next time.